Why Does My Cat Bite Me When I Stop Petting?

Cats are very independent, individual creatures. There are many reasons why your cat might bite when you stop petting it.

Some of them are physical, some of them are emotional. Some have to do with you, as a human, misreading the communication signs that your cat is giving you.

Why Does My Cat Bite Me When I Stop Petting?

Here are some ideas for why your cat might give you a nip or even a hard bite when you stop petting it:

Now let’s discuss each of these. Then we’ll talk about how to stop biting.

Your Cat is Feeling Insecure

A cat that has been recently introduced to a new household, or one that has been the “only” cat, or one of a select number of cats, might show an extreme desire for your affection.

For example, large, lovely calicos have developed a habit of holding onto its owner with both front paws in a desperate effort to be the center of all attention. No teeth or claws are part of this behavior, but this cat can hold on hard enough that it actually hurt.

Some reasons for cat insecurity include:

Your Cat Wanted Something Besides Petting

Cats are often guilty of a little thing sometimes called “cupboard love.” They offer affection, smooching, buzzing and tugging on your clothing because they want a different kind of food, cat treats, toys  or even their litter box cleaned. 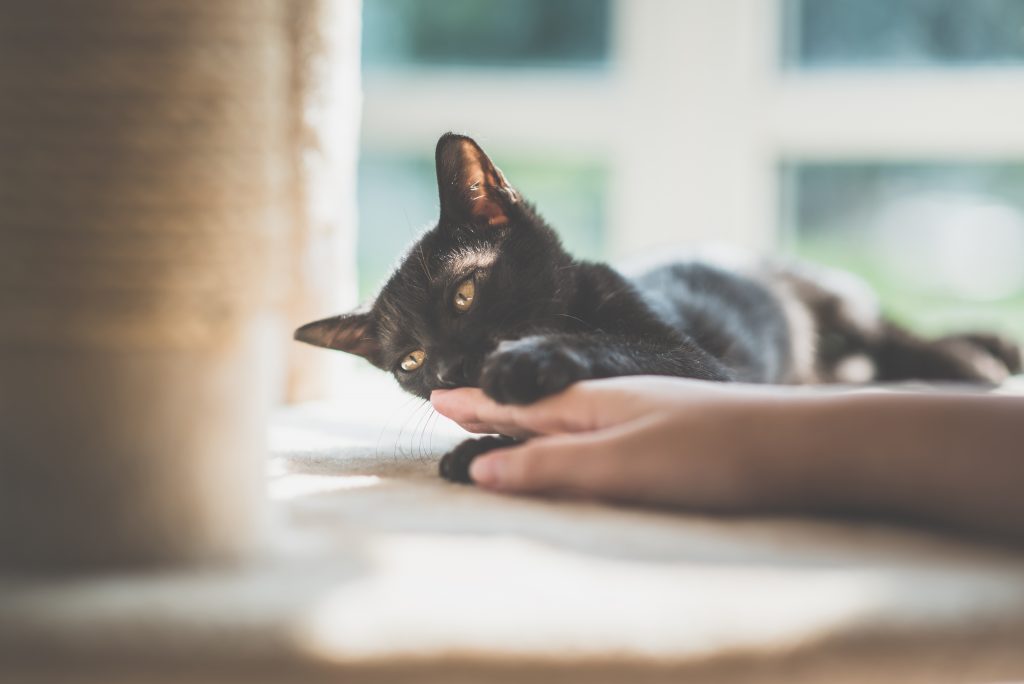 Although biting isn’t usually associated with a dirty litter box, it’s the way your cat is using to get your attention and to let you know that you have done something that kitty has determined is inappropriate.

Your Cat Was Overstimulated

When you stroke, scratch or give attention to your cat, it usually responds by purring. Your attention feels good. But sometimes it can simply become too much, and that can result in a nip.

In this case, however, the cat is enjoying what you’re doing and you’ve simply stopped before it’s actually ready.

Your Cat is in Heat

If your kitty is in heat, it’s desperate for personal satisfaction. It might exhibit greater interest in the other cats in your household than in female cats during this time.

It might roll around on the floor, rub against your ankles, climb on your lap and purr. If you stop providing the affectionate stimulus that it’s seeking, it might very well give you a nip.

Furthermore, cats often become quite rough during love play, biting and wrestling. The good news is that this condition only comes around once every two or three months, and usually only lasts around a week.

The behavior disappears completely if you have the cat spayed.

Bad Habits Instilled as a Kitten

When kittens are small and they chew on your fingers, it’s cute. Their little baby teeth are sharp, but their jaws aren’t strong enough to hurt.

When they grow older, they might respond to having their tummy tickled or rubbed by grabbing you with their front legs, kicking against your hand with their back legs and chomping on your fingers.

This isn’t real aggression. This is an affectionate play. However, this isn’t a habit you want to encourage in any cat, especially in a male of one of the larger, heavier breeds.

If you have gotten the cat from an animal shelter, you might not have been the one that interacted with it as a baby. Therefore, you really don’t know what its former owner did that might have prompted the undesirable behavior.

How To Stop Biting

No one wants to be bitten by a cat. Even a domesticated cat who is fed commercial cat food can cause an infected wound on a human, another cat or even a dog.

Besides, biting is simply not appropriate behavior in an adult cat.

There are things that you can do to help retrain your cat. Except for the very wildest feral cats, most cats can be taught better behavior.

Here are some methods you can effectively use: 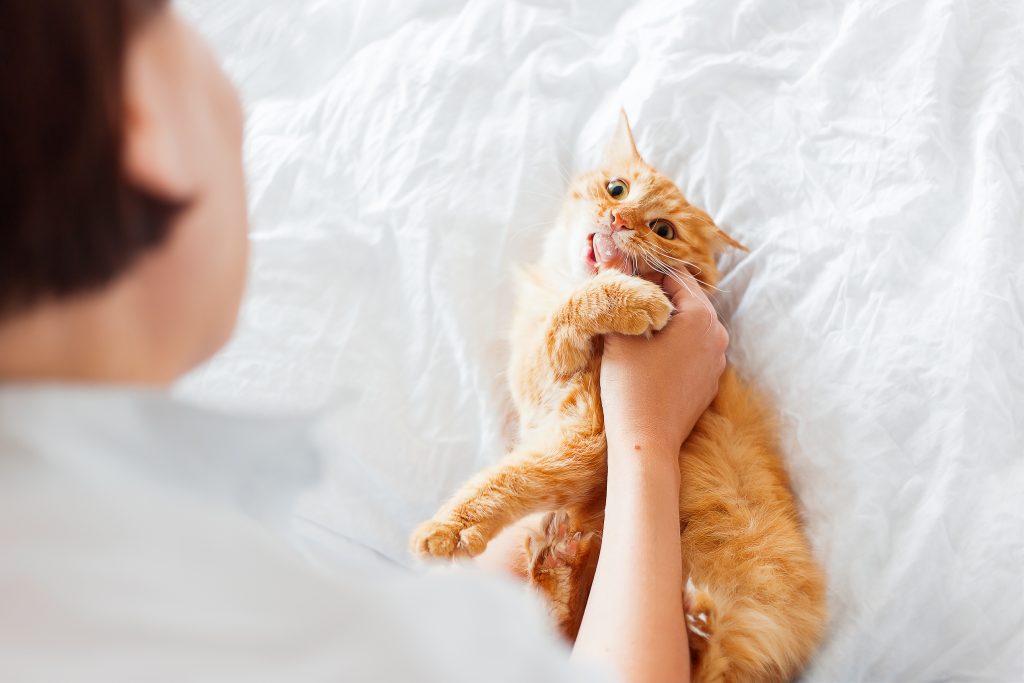 When the biting starts, the fun stops

Yell OUCH! Firmly and forcefully (but not so loud that the neighbors think there’s a problem). Put the cat down. If it persists in bad behavior, put it in another room or shut it inside a cat carrier for a few minutes. Don’t reward your cat by giving it something it desires!

By the same token, keep the “time out” short and reasonable. You’re making a point, not punishing.

Do not engage in rough play with your cat

Rough play can be all fun and games, but it’s easy for rough play to turn painful when one participant is packing claws.

Rough play teaches your cat that it’s acceptable and fun to use his or her claws and teeth on humans. It could be a fun pass time if you’re wearing gloves, but it instills bad habits in your kitty.

It’s best to pass on the rough play so that all non-glove-wearers don’t get hurt.

Give your cat a way to interact that doesn’t involve your skin. Have some fun encouraging your cat to chase a laser light, tackle a feather toy or even chase an old sock dragged along a bed or other furniture.

You’ll still be giving the cat the attention it craves, but you’ll be doing it without putting yourself in danger.

Offer a treat when it is time for petting to stop

Before your cat has a chance to bite you, offer a favorite cat crunchy or another treat.

While you never want to overdo cat treats because they tend to be high in calories, a morsel or two, placed in an area that will encourage the cat to voluntarily leave your lap, can go a long way toward easing that moment when you need to disengage.

Take your kitty to the vet for a checkup

Sometimes unexpected biting can be the result of something you did that hurt.

Painful ears, swollen lymph glands, a urinary infection or a wound from fighting with other cats can cause a condition that might have been painful when you tried to put the cat off your lap.

If your cat seems to be biting you for no good reason, take him or her by the vet for a checkup.

Cats are not humans, and they are not dogs. Modifying their behavior has to happen within the framework of cat psychology. To make things even more confusing, no two cats are precisely the same.

Each one has its own little personality quirks. It’s one of the wonderful things about cats, as well as one of the causes of frustration for cat custodians. 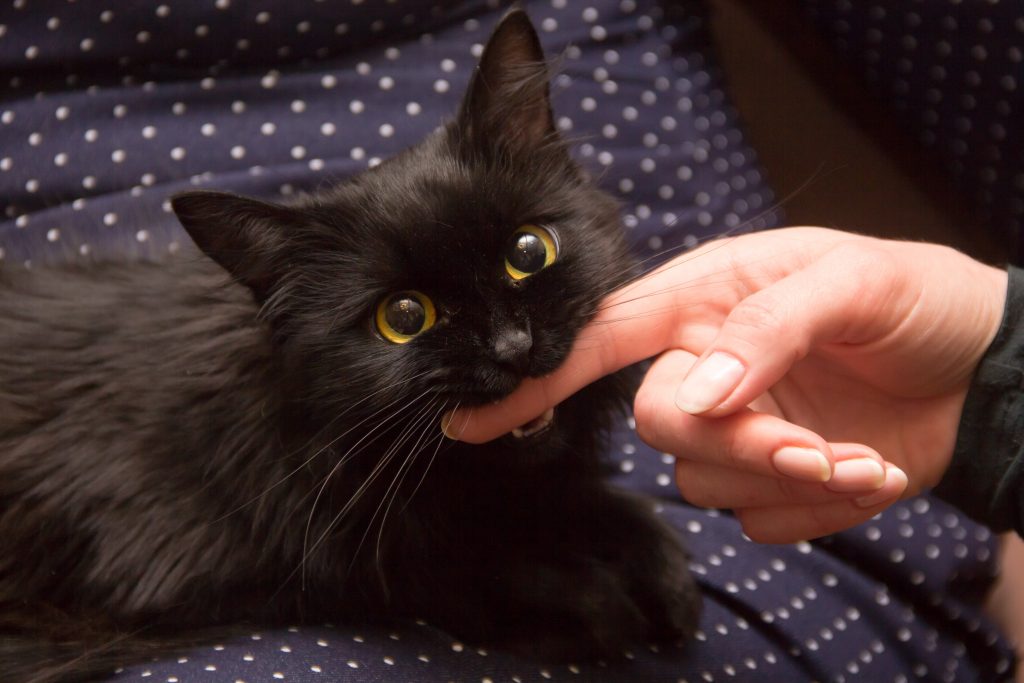 You have three goals when modifying behavior for a cat. The first is to let the cat know that the behavior doesn’t make you happy. Your second is to distract or dissuade the cat from the behavior. And the third is to replace the behavior with better behavior.

Be prepared for frustration and disappointment. Cats can be extremely persistent and quite stubborn. You have to make it worth their while to do it your way.

By disassociating biting with anything that’s fun or desirable, you make the behavior less valuable for the cat. As a general rule, even the grumpiest of cats won’t engage in antisocial behavior without cause.

The key is to discover what’s causing the cat to think that biting will bring about a desirable result. Or, if that’s not possible, to encourage alternative behaviors that will bring greater enjoyment to both your cat and you.

Try not to be hostile or “punish”. Cats don’t understand punishment the same way we do and instead of fixing the problem, your cat will try to avoid you. Work on changing behavior by reinforcing positive behavior with treats, affection, and fun.

Pay close attention to what you were doing when you stopped petting your cat. Did you pick it up? Did you push it off your lap? Did you squeeze it or attempt to put your face close to the cat?

It’s just possible that in signaling the end of petting time, you did something that your cat interpreted as being aggressive. Your cat might have simply been trying to defend itself from what it perceived as a threat.

Talk with your vet or with an experienced cat owner. There’s a very good chance that you can discover what’s triggering the bad behavior and bring it to an end.

There are no bad cats, just misunderstandings between cats and humans. So, keep that in mind before you decide to punish your cat after it bit you. The cat doesn’t want to harm you. It just wants to let you know that it isn’t liking that one particular thing that you did. 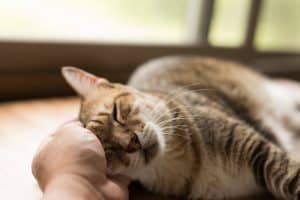 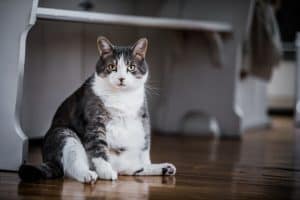 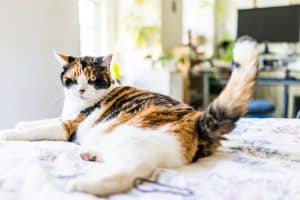 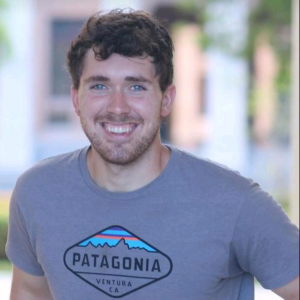